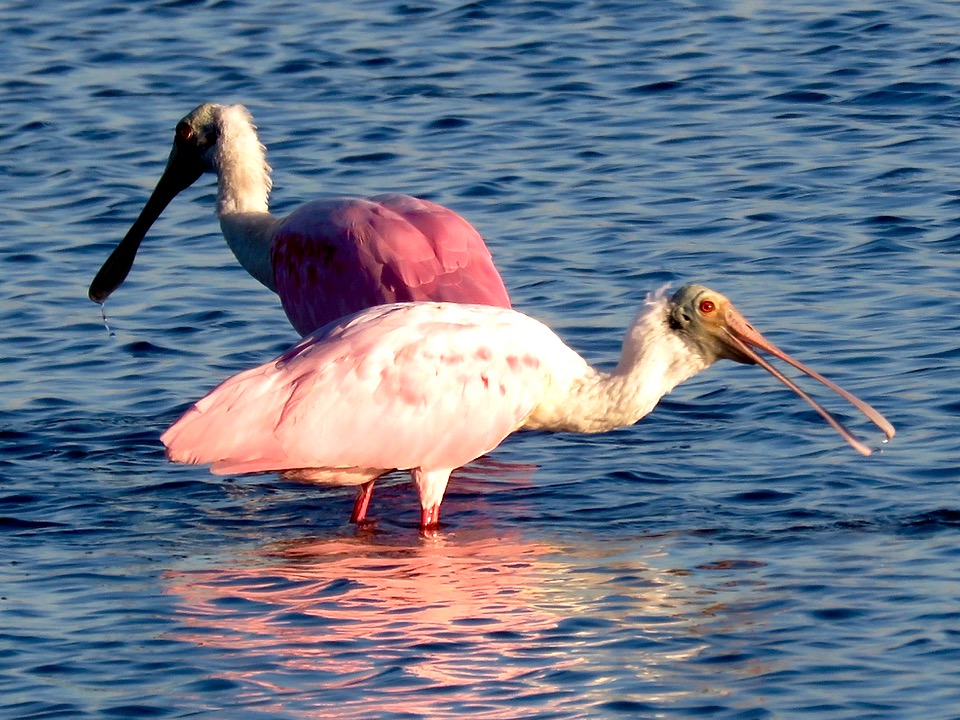 We’ve been planning to visit Galveston Island for years. In 2008, we made reservations for two weeks at the state park, but Hurricane Ike flattened the park just weeks before our arrival. “Sorry to inform you…”read the email telling us that the park would be closed indefinitely. So we rerouted ourselves south to Goose Island State Park in Rockport.

We fell in love with Goose Island, and were looking forward to revisiting in January. I made reservations far in advance. And then Hurricane Harvey slammed into Rockport last August. “Sorry to inform you…” read the email telling us that the park would be closed indefinitely. We rerouted ourselves north to Galveston Island State Park. And that’s how we finally got to Galveston.

I don’t believe in magical thinking (much), but I must admit I’m a bit hesitant now to make reservations for Texas coastal state parks.

One thing is for certain: although Galveston has suffered more than one devastating hurricane, it is an extraordinarily resilient community of both people and wildlife.

We settled into the state park, and this was our view. We could have chosen a beachfront site, but we preferred a site overlooking the marsh, where we could watch the shorebirds foraging and the pelicans floating by. View from our campsite overlooking the marsh There can be great rafts of American White Pelicans here

Several miles of trails lead through the marsh, and there’s always the possibility of seeing Roseate Spoonbills. That color! Those bills! I think these are my favorite birds (but don’t tell the others). Roseate Spoonbills searching for food near the boardwalk

These flamboyant, colorful wading birds were common in southeast coastal areas until they were almost eradicated by plume hunters in the late 1800’s. It makes me sad and mad to think about.

How lucky we are that spoonbills still exist on this earth. We see them on the Gulf Coast of Texas, Louisiana, and Florida—but their numbers are small, and they’re vulnerable to habitat degradation. Spoonbills seem to always be searching for food

Spoonbills have an interesting feeding behavior, swinging their heads from side to side through shallow waters as they sift through the muck. Special sense receptors on their bills detect tasty morsels such as small fish, shrimp, crayfish, crabs, or aquatic insects.

The shrimp, crabs, and other crustaceans provide pigments called carotenoids that give the birds their pretty pink feathers. Ah, now it’s easy to see how the Roseate Spoonbill got its name! 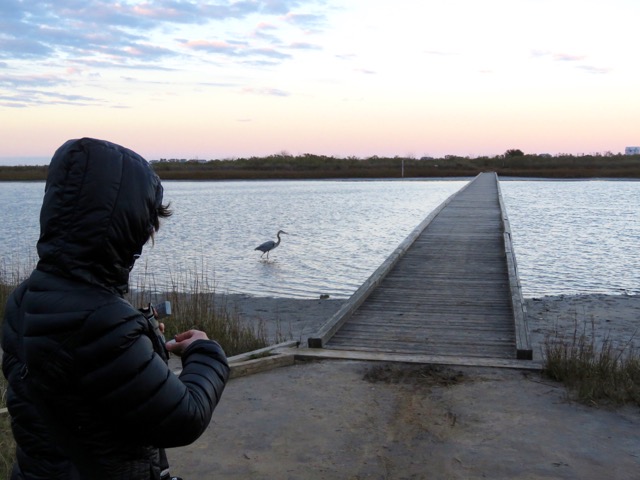 A late afternoon walk on the marsh trails

A Great Blue Heron hangs out by the boardwalk, completely unfazed by our company

We were impressed with the historic district, which managed to survive not only the 2008 hurricane, but also weathered The Great Storm of 1900, a category 4 hurricane that holds the title as the deadliest natural disaster in the history of the United States.

It’s astonishing that anything survived that storm. More than 8,000 people perished, and 3,600 buildings were destroyed. But the East End Historic District appears largely intact, with beautifully restored mansions, elaborate churches, and a large number of Victorian homes.

It’s obvious that Galveston was once a thriving port and the grandest city in Texas. We enjoyed walking around the historic district, admiring the homes and chatting with the locals. Sculptures carved from grand old oaks felled in the 2008 storm decorate the gardens. And apparently, Mardi Gras is a big deal here. We were visiting just as people were decorating their homes for the celebration to come. Sacred Heart Church, an ornate Galveston landmark with Moorish/Romanesque/Byzantine influences. The original sanctuary was a victim of the Great Storm of 1900, but was re-built in 1904. Bishop’s Palace, a Victorian castle built in 1892 in a style called “Chateausque.” The American Institute of Architects named it as one of the 100 most important buildings in America. Next time we’re in Galveston, I’m going inside for a tour.

Sculptures from great oaks felled in the 2008 hurricane decorate the streets in the East End Historic District. Here, two herons peek through the foliage. The Tin Man and Toto standing on a corner Historic downtown Galveston (AKA “The Strand”) was once considered the “Wall Street of the Southwest” before the Great Storm of 1900 brought the town to its knees.

Winding up our Galveston adventures, we discovered Galveston Island Brewing. Started by a former tugboat captain, the craft brewery turns out delicious beer (true to form, I had a porter, and Eric an IPA). It’s a friendly, colorful atmosphere—and best of all, they have a resident brewery kitty, who made happy hour even better. Happy hour with the cat at Galveston Island Brewing

We loved Galveston Island State Park. There are two parts to the park: beachfront sites, and sites arranged in a wagon-wheel formation on the bayside. If you choose a site backing up to the marsh, the birding and the sunsets are wonderful.

The bayside campground has water and electric hookups and good Verizon. It’s a convenient 15- minute drive into downtown Galveston and the historic area.

The campground fees are reasonable ($20 per night bayside) BUT Texas state parks charge a $5 per person day access fee in addition to your campsite fee (making it $30 per night for two people). When we’re in Texas for more than a week (and it ALWAYS takes more than a week to make our way through Texas), we buy an annual pass for $70, which eliminates the day use fees and includes four half-price nights of camping at the park of your choice. Next Up: The Bayou Country: Breaux Bridge & New Orleans