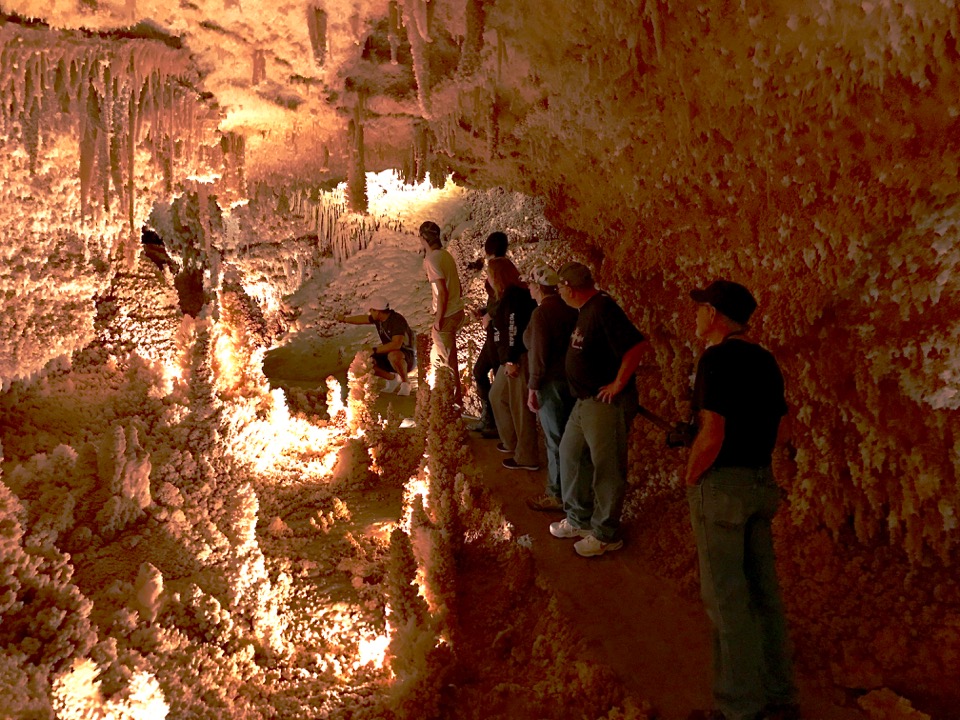 At the edge of the Texas Hill Country lies a place so unique “its beauty cannot be exaggerated, even by Texans.” That’s what Bill Stephenson, founder of the National Speleological Society said about the Caverns of Sonora.

Well, that piqued my interest. And when I read that the caverns are filled with a vast array of glittering crystal-like formations, that made it even more enticing. I love sparkly things. Stars, crystals, fireflies, fireworks, champagne…the sparklier, the better.

The Caverns of Sonora happened to be conveniently halfway on our route from the Big Bend area to San Antonio, off Interstate 10 about 15 miles southwest of Sonora. There’s not much around here—so it’s pretty sweet to not only have the caverns to visit, but to also have a place to stay the night. We pulled into the campground and chose our site for the night—$25 for water and electric hookups. The next morning, we walked over to the gift shop to purchase our tickets for the first tour of the day. The tours cost $20, are offered every two hours starting at 9:00 a.m., and are first-come, with each tour limited to 12 people. The small group makes for a great experience (we had only eight people on our tour). The gift shop is where you buy your tickets for the tours, and also has a pretty spectacular array of gemstones and rocks for sale

We lucked out with an excellent tour guide, a college student with a passion for speleology who spends his summers and winter holidays guiding people through the caves. Raphael was patient, knowledgeable, and convinced me to leave my down vest behind. Trust me (and Raphael), you do not want to wear anything more than a lightweight shirt in the caves, even if it’s 35 degrees outdoors (as it was in January).

The caves are about 72 degrees year round and 98 percent humidity, which makes it feel like Florida on a hot summer evening. You are not allowed to remove your jacket and tie it around your waist because the formations are delicate, and many of the passageways narrow. The owners of the caves are doing their best to protect the cave, and the only thing you’re allowed to bring along is your camera.

As the story goes, the entrance to the cavern was first discovered in the early 1920s by a dog chasing a raccoon down a hole. Decades of exploration followed, hindered by a 50-foot pit just 500 feet in from the entrance. Those intrepid early explorers eventually fashioned a network of stairs, narrow pathways, and bridges. On our journey, we traveled 155 feet below the surface through two miles of spectacular formations. For two hours, I forgot my dislike of caves. It is truly an otherworldly experience. Our guide Raphael at the entrance to the cavern Descending into the cavern

The first little bit of the cavern is nothing to write home about. But as forewarned, it was warm and humid. Really, really humid. My camera immediately fogged up and I had to resort to using my phone for photos.

Things soon got really interesting. No wonder this cavern is regarded as one of the most highly decorated caves in the world. Before too long, the formations start to get interesting So fancy! These are reputed to be some of the finest cave formations in the world. I think these were called toilet brush formations (not really, but that’s what they look like) The passageways are narrow through the walls of cave coral. Kind of feels like walking underwater through a coral reef. Our wonderful guide pointed out formations along the way A cave pool filled with pennies, sacrificed to the universal impulse for making wishes. The copper pennies turn the water green. Halo Lake; the green cast is from pennies tossed in long ago. Enjoying the Crystal Palace. This is truly a remarkable cave. Cave bacon, always a favorite in any cave. Doesn’t that look delicious?

The Caverns at Sonora are known for their concentration of rare helictite formations. All caves have stalagmites and stalactites (stalagmites grow upward from the floor, stalactites grow downward from the ceiling—they “hang tight”). But helictites grow outward from the walls of the cave. How the heck they do that, I have no idea. Apparently, scientists don’t even know for certain. But they’re beautiful. I still don’t like caves. But this was a totally cool experience, and I’d do it again.

The Caverns of Sonora offer electric and water hookups, with level gravel pull-through sites. There would be little privacy if the campground was full, but there was no one else in the campground while we were there. Bathrooms and showers are available (we didn’t use them). Weak Verizon connection. The best part is that you’re walking distance to some of the most unique caverns in the world. And it’s a great stopover should you be traveling between Big Bend National Park and San Antonio. Pull-through sites at Caverns of Sonora

Next Up: Biking To The Missions (And So Much More): San Antonio, TX