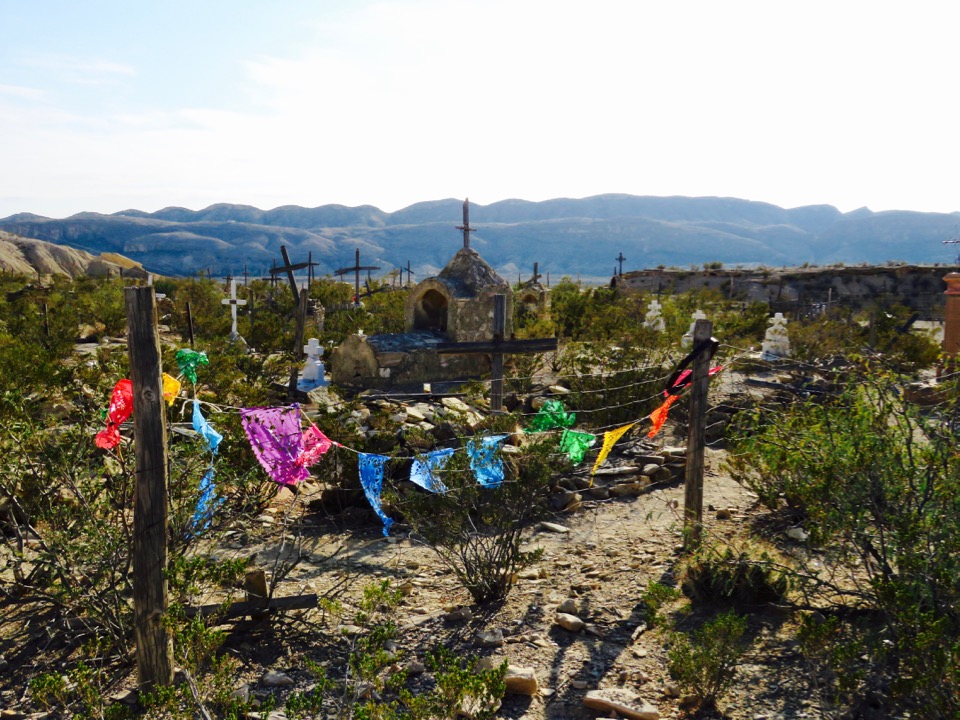 We like off-the-beaten-path towns. The smaller and quirkier, the better. At either end of Big Bend National Park lie two such gems: Terlingua and Marathon.

Both are in remote West Texas. Both have breathtaking night skies filled with shimmering stars that stretch to infinity. Both attract people who are happiest coloring outside the lines of conventional life. But despite their similarities, Terlingua and Marathon have distinct personalities.

Here’s what we discovered: Terlingua is the more unpolished of the two, and the best place to kick back with a beer and hang with the locals on the front porch of the rustic trading post. Marathon, on the other hand, is an excellent place to enjoy a superb prickly pear cactus margarita in an elegant 1927-era Western hotel.

Located just outside the far western border of Big Bend National Park, Terlingua flourished as a quicksilver mining town from the late 1800s until the mid-1940s. They even had their own movie theatre. But the demand for mercury diminished after WWI, the miners walked away, and Terlingua was left to fade into the desert.

Somewhere in the past couple of decades Terlingua was rediscovered by artists, loners, and eccentrics. Now it’s a ghost town with a population of 56. Make that 57, if you count Clay Henry, the taxidermied beer-drinking goat who was the former mayor of next-door Lajitas. (The actual human population may be closer to a couple hundred, no one knows for sure.) At the entrance to town is the historic cemetery. There are no fancy monuments here; just simple stonework, Mexican style grottoes, and wood and filigree crosses. The Day of the Dead is reputed to be quite a festive celebration here. Near the Terlingua cemetery The rustic and historic Terlingua cemetery

The old wood and adobe church is still here, and still used. The former miners’ commissary is now the Terlingua Trading Post, offering a surprisingly excellent array of Native American and Mexican crafts—and an equally well-curated selection of craft beers. And the Starlight Theatre, formerly the movie theatre for the miners, offers dining, drinks, and live music.

We celebrated New Year’s at the Starlight and it was great fun. But a few days previously, sitting on the porch drinking a beer from the cooler at the trading post and listening to an impromptu music jam—that was every bit as good. The church has a rustic and colorful interior A bug sculpture, just one of Terlingua’s many artistic offerings

Locals gather each afternoon on the porch of the Starlight Theatre and the trading post next door. This is the place to enjoy some local color in the form of conversation, music, and a sunset over the Chisos Mountains. More reclaimed junk artwork, this time at the Starlight Theatre Clay Henry, the cranky but beloved (and now stuffed) goat mayor on display at the Starlight Theatre. Legend has it that he could pound down 40 beers a day. New Year’s at the Starlight Theatre. It was a pretty awesome way to ring in another year.

Just 40 miles north of Big Bend National Park sits the tiny town of Marathon, population 470. The Chamber of Commerce proclaims “There’s nothing to do here.” Well, it’s a peaceful, beautiful place to do nothing. And that’s exactly what we did for two nights as we wrapped up our adventures in Big Bend. The French Grocer, with just about everything you need

One of the most unusual places in Marathon is a colorful, fanciful hacienda sculpted of straw bales and paper crete made of recycled materials. The owner and builder invited us in for a tour—it’s a remarkable work of art, including the gardens and greenhouse filled with bougainvillea, banana trees, flowers, and herbs. In the courtyard of Eve’s Garden B & B

The biggest attraction in town is the Spanish-Mission style Gage Hotel, built in 1927 for cattle baron Alfred S. Gage. (The architect was Henry Trost from El Paso, who also built El Paisano in Marfa.) Every inch of the hotel is exquisite, down to the gingerbread replica decorating the lobby (we were there just before they took down the holiday decorations).

To celebrate the beginning of another new year on the road, we planned a special dinner at the 12 Gage Restaurant in the hotel. After cocktails in the White Buffalo Bar, we settled into our black-and-white cowhide chairs for a Moroccan-inspired meal of spiced quail with basmati-apricot pilaf and charred tomato and green beans. Really tasty. But really skimpy on the stuffing. As it turns out, only a teaspoon of stuffing fits into a quail.

Those prickly pear cactus margaritas in the White Buffalo Bar, though. Those alone are worth the trip to Marathon. We caught the tail-end of the Gage Hotel decorated for the holidays, replete with a gingerbread Gage Hotel

The next day, all holiday decorations were cleared away. The decor of the hotel is understated classic Western elegance. A tooled and silver embellished saddle is part of the decor If you come to Marathon, don’t miss the White Buffalo Bar Just across the railroad tracks are the Gage Gardens, which would be even more beautiful in spring A Golden-fronted Woodpecker in the gardens

About the RV Park:

We visited Terlingua twice while staying in Study Butte during our week in Big Bend National Park.

To explore Marathon, we stayed two nights at Marathon Motel & RV Park. The sites are basically big open pull-throughs on dirt and gravel, but the park was quiet and the sunsets and dark night skies are spectacular. Plus, it’s an easy half-mile walk into town. Full hookups, good cell coverage, free wifi, and laundry (although there is only one washer and dryer).

There’s a lovely outdoor fireplace and courtyard where people gather most evenings, but it was so cold when we were there that no one ventured outdoors after dark. People also often set up telescopes for star gazing (but no one braved 17 degrees for a star party).

When you reserve, ask for a site in the back area away from the highway. The first two nights of your stay they honor Passport America, which makes it a great deal. Dang, it was cold while we were there! The fountain was frozen in the courtyard of the RV Park. Next Up: Exploring A Crystal Cavern: Sonora, TX