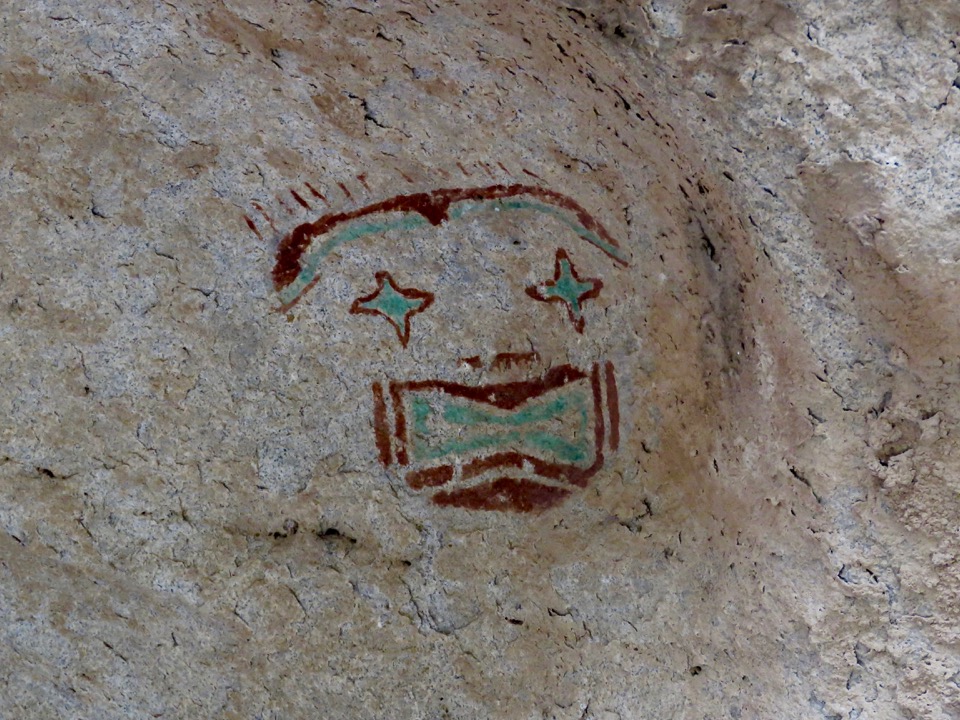 In Search Of The Starry-Eyed Man: Hueco Tanks State Park

In late December, we made our third trip in five years to Hueco Tanks State Park. This time, I was not leaving until we got to see the Starry-Eyed Man.

Located in a remote canyon 30 miles northeast of El Paso, the park contains a unique assortment of pictographs left behind by the ancient peoples who called this desert oasis home. Most pictographs are painted with red, brown, or black pigments, but the Starry-Eyed Man includes rare green pigments. Not only is it a cool image, the colors are remarkable. I had to see it for myself.

Hueco Tanks State Park protects one of the largest concentrations of Native American rock paintings in North America, as well as the largest number of painted masks. Once a stagecoach stop on the Butterfield Overland Mail Route, the park also contains thousands of inscriptions carved into rocks by visitors who passed this way in the mid-1800’s and early 1900’s. This is the most tightly supervised park we’ve ever visited. And for good reason, since there are apparently a number of people with poor impulse control who feel the need to add their names to the rocks, including scratching graffiti into the ancient art.

Visitors are required to view a 15-minute video about the ancient peoples and the pictographs, in hopes that they will be inspired to protect the artwork. The visitor center at Hueco Tanks State Park, once the home of rancher Silverio Escontrias

Only 70 people at a time can enter Hueco Tanks without a guide, and only North Mountain, one of the park’s three peaks, is open to self-guided exploration. But before you set foot on the trails, you need a permit—even if you’re camping in the park.

A word to the wise: Reserve a permit for North Mountain when you make your camping reservation. Otherwise, you’ll need to show up each morning before 8 a.m. at the ranger station to try for one of the 10 first-come-first-served permits.

Hueco Tanks is a renowned bouldering site, and people come from all over the world to practice clawing their way up the boulders with no equipment other than their hands and feet (and a thick crash pad below). Most of the people who come here are interested in bouldering, which leaves the trails wonderfully uncrowded. On the trails at Hueco Tanks, part of the North Mountain area accessible without a guide

If you’re up for a bit of an adventure, ask for a map to Cave Kiva. (You’ll have to leave your driver’s license hostage.) The hike takes you up North Mountain to a hidden cave, where eight beautifully painted and remarkably well-preserved masks await. For the Jornada Mogollon, an agricultural people who lived here from 200 to 1450 A.D., the masks represented their ancestral spirits and acted as a bridge between the human and the spirit worlds.

The masks are magnificent, and we’ve made the journey to Cave Kiva all three times we’ve visited the park. Hiking up North Mountain in search of Cave Kiva The huecos were filled with water from recent rains The stone alligator points the way to Cave Kiva Inside Cave Kiva, it’s light and spacious, and the mask pictographs are wonderful This is one of our favorite masks Finding the path back down the mountain is always tricky The plaintive, melodious songs of Canyon Wrens can be heard echoing throughout the canyon A camp cook from 1924 recorded his visit to Hueco Tanks

And now, the whole reason we returned to Hueco Tanks: Finding the Starry-Eyed Man. This pictograph, along with many others, can only be visited on a guided tour. Reservations for guided hikes must be made at least one week in advance. Tours are given Wednesday through Sunday, the cost is two dollars, and they’re excellent.

If you’re interested in this particular pictograph, be sure to request tour number two. Apparently, tour number one is the default tour, and while it’s interesting (we signed up for this tour on our first visit to the park), it won’t take you to what we think are far more unique pictographs.

In our three-hour tour of rock shelters and caves, we found some of the most memorable pictographs we’ve seen in our travels. On the trails of the West Mountain district An ancient stone grinding pit (for grains, beans, and seeds)

The dry climate and location of the masks help to preserve them (most are located in caves, or beneath rock overhangs, which protects them from the sun). Paints were made from ground minerals (ochre, carbon, and gypsum), bound together with animal fats and plant juices. Brushes were created from yucca fibers and human hair while reeds were sometimes used as a primitive airbrush technique. Standing next to the White-Horned Dancer Gazing down at us from an eight-foot-high rock overhang, the Starry-Eyed Man was just as extraordinary as I had imagined. The Starry-Eyed Man mask, with the unique green pigments rarely found in pictographs

About the campground:
Twenty sites are tucked into red rock boulders in Hueco Tanks Campground, with spectacular sunsets just about guaranteed. Water and 50-amp electric hookups; the park also offers showers, restrooms, and a dump station. The sites are level and spacious, most have ramadas with picnic tables. Verizon coverage is mostly good, but a bit bumpy. Reservations must be made by phone and are limited to three days.

If you’re camping at Hueco Tanks, be prepared to be locked in at night (you can leave in case of emergency). You must be back in the campground by 5 p.m. (might be a bit later in summer). I wasn’t kidding when I said this park is tightly controlled. But it’s worth it! A beautiful sunset from our campsite

Next Up: A Postcard From West Texas: Fort Davis, Alpine, And Marfa